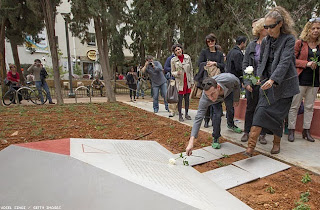 Tel Aviv Mayor Ron Huldai joined members of the LGBT community in Tel Aviv park yesterday to unveil a new memorial dedicated specifically to the LGBT victims of the Holocaust.
The concrete triangle-shaped plaque is said to resemble pink triangles gays were forced to wear in concentration camps during World War II, and reads “In Memory of those persecuted by the Nazi regime for their sexual...
Prev POST
Next Post