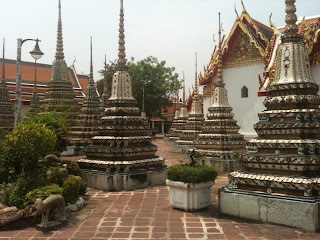 Walking through the Temple of the Reclining Buddha in Bangkok
Friday 11, 2011

Located in the center of Bangkok near the Grand Palace of Bangkok is a magnificent Temple of the Reclining Buddah temple called Wat Pho. Its official name is Wat Phra Chettuphon Wimon Mangkhalaram Ratchaworamahawihan and more interestingly the temple itself is also known as the birthplace of traditional Thai massage which Brendan and I enjoyed thouroughly. Wat Pho is one of the largest and oldest wats...
Prev POST
Next Post