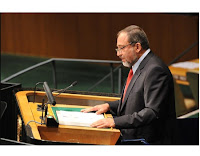 Listen to Lieberman's Plan at U.N.

Haim Misgav
All those people who are now calling for Avigdor Liebermanto quit, or be fired, should know that we’ve seen similar conduct by previous foreign ministers. For example, once upon a time we had Foreign Minister Shimon Peres, who worked behind his prime minister’s back and formulated...
Prev POST
Next Post